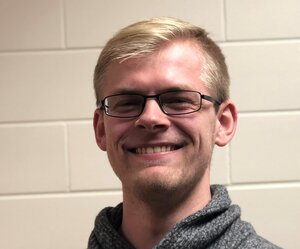 Ryan was raised in rural Eastern Oregon before attending Oregon State University, where he graduated with a Bachelor’s Degree in Chemical Engineering. Ryan began graduate studies at the University of Wisconsin-Madison in the Fall of 2019, and joined the Gebbie Group the following Winter. Ryan enjoys hiking in the mountains, playing board games, and exploring different restaurants in Madison.

As the prominence of electronic devices and vehicles grows, the demand for safe, renewable, and convenient energy access grows with it. Ionic liquids are seen as an attractive alternative to conventional battery electrolytes due to their stability and tunability for different applications. Ryan is interested in the study of the thermodynamics and transport phenomena of ionic liquid electrolytes, and how the structure of these ionic liquids plays a role in achieving desirable properties for energy storage applications.