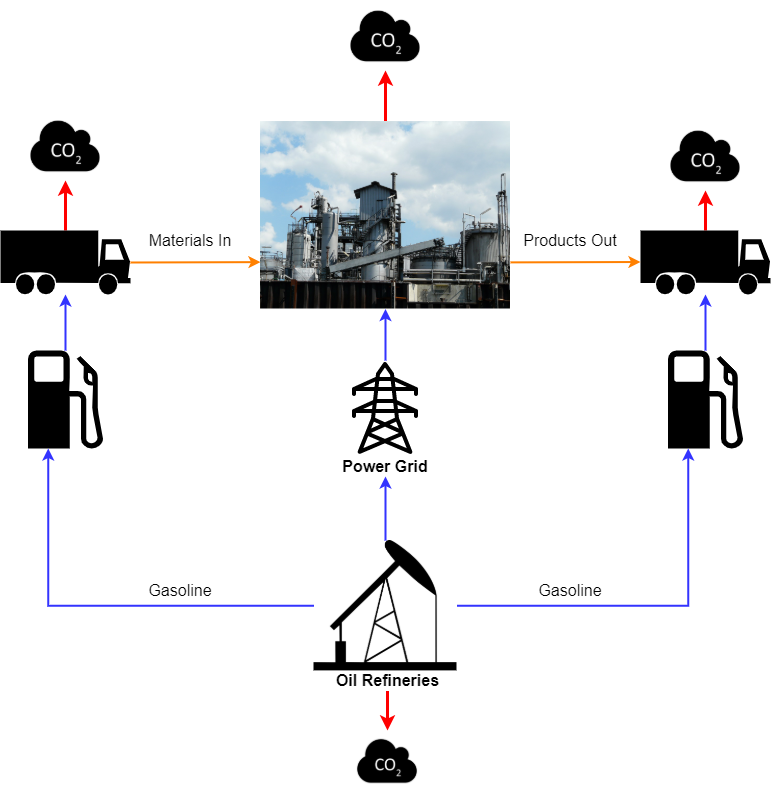 Last month, Bill Gates made headlines when he asserted that while “COVID-19 is awful, climate change could be worse” (you can read his actual blog post here). In a time when our lives have been so drastically changed by the pandemic, it’s hard to think of climate change as the most urgent issue. But all things considered, and without downplaying the very real and very negative consequences of the pandemic at hand, we do still need to discuss climate change. In fact, some researchers have been working on finding links between climate change and rises in influenza outbreaks (this 2010 paper from the journal Global Warming investigates changes in bird migration patterns since birds are a major carrier of diseases like avian flu).

Global warming is a problem that creeps up on us, and without collaboration between the general public, policymakers, and researchers to address this problem, we may soon find ourselves in a situation where climate change becomes increasingly difficult to reverse. Even now, we are seeing the impact of climate change already, most of which is caused by human activity. There’s been a lot of talk about a “2 °C” increase in temperatures globally compared to temperatures prior to the Industrial Revolution.

Although this seems like a relatively small increase, its effects can be pretty drastic. Already, we’ve seen longer drought seasons in places like California, which means that not only is the wildfire season longer, but also water security is increasingly an important issue for residents. When an area experiences long drought seasons, much of the usual sources of drinking water becomes scarce. As a result, people have to look towards saltwater sources, like the oceans, which is hard to clean for enough for human consumption. Desalination plants in Australia, for example, may not be able to provide enough drinking water for the country’s citizens during dry seasons.1 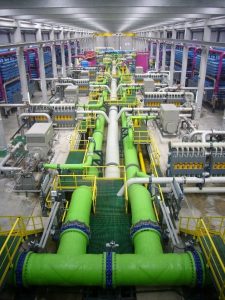 Treatment facilities like this reverse osmosis desalination plant might not be able to keep up with human consumption needs in places like Australia if droughts exacerbated by climate change continue. (Image from Wikimedia)

With the rapid melting of glaciers, we’ve seen sea levels increase by 3 inches in the past 25 years alone.2 Again, it might not seem like a lot, but globally, it is a major contributor to land erosion, leading to significant danger for coastal cities and islands. Combined with an increase in the devastation of tropical storms and hurricanes, rising sea levels threaten infrastructure, risk human lives, and destroy natural habitats for a variety of animals. Long droughts and rising sea levels are only two of the more pressing issues caused by global warming. Although the effects may not seem like a lot right now, if humans don’t take immediate corrective action, the consequences will only become more dire.

Why do we keep hearing about “carbon neutral” and “carbon negative” initiatives?

In recent years, you may have seen or heard of different organizations discussing their impact on climate change, such as adopting initiatives to go “carbon neutral.” In January of this year, Microsoft declared that they aim to go a step further and become “carbon negative” by 2030.3 So what do these terms really mean?

Let’s first zoom out a little bit to consider the causes for global warming. One of the major contributors to climate change is carbon dioxide, or CO2, in the atmosphere because it is a greenhouse gas. Greenhouse gases absorb energy from the Sun and reflect it in all directions. Some of this reflected energy is directed towards the Earth, which warms the Earth and everything on it. If you think of a greenhouse, where the glass walls trap the Sun’s heat and warms up the inside, the atmosphere containing greenhouse gases acts as the “glass walls” of the Earth. It prevents the heat from escaping back into space. Normally, greenhouse gases prevent us from freezing to death, but human activity has caused the amount of CO2 in the atmosphere to increase by more than a third since the start of the Industrial Revolution.4 This drastic increase, combined with the release of other greenhouse gases, contributes to rising global temperatures. To learn more about this process, check out the Additional Resources section below for NASA’s explanation! 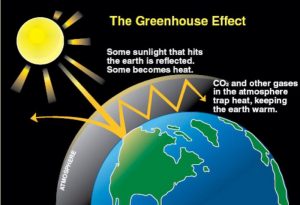 The greenhouse effect refers to the trapping and reemission of energy radiating from the sun by greenhouse gases. These gases, of which CO2 is the most prevalent, are responsible for warming up the Earth. (Image from Medium)

The difference between “carbon neutral” or “carbon negative”, is the net effect on the amount of CO2 in the atmosphere. If an organization aims to be carbon neutral, their goal is to somehow remove the amount of CO2 that they release, meaning that there is overall no change in CO2 concentrations resulting from their activity. For companies, this may mean that in order to offset the amount of CO2 they add to the atmosphere through daily operations, they either invest in technologies or pay a certain amount of money to help in the effort to remove CO2. An organization that aims to be carbon negative, on the other hand, must incorporate ways to remove CO2 from the atmosphere throughout their operations. Each company may go about it differently and the wide range of industries make it hard to prescribe a specific method that everyone can follow.

And it gets even more complex than that! Consider a generic company that manufactures chemicals: the most obvious source of CO2 emissions would be through their manufacturing process. But that manufacturing process would need a source of electricity, right? Although there’s an increase in the use of renewable resources like solar or wind, a vast majority of the power grid still relies on coal and natural gas, which is a major contributor to CO2 emissions. And what about raw material for the manufacturing process? More likely than not, the raw materials that the company is transforming into their desired products need to be sourced from somewhere, which means that trucks or some other form of transportation is required. These trucks usually rely on gasoline, which produces CO2 as a byproduct, thereby releasing CO2 into the atmosphere. This issue is further compounded because the company also must distribute their chemicals to be sold. We’ve only scratched the surface, but it’s clear that going carbon negative, or even carbon neutral, is a very difficult thing to accomplish simply because of the sheer number of ways that our modern processes contribute to the carbon footprint. 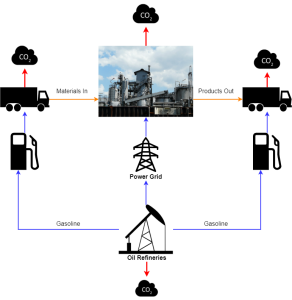 All aspects of a supply chain for a company can contribute to its carbon footprint. Even companies that don’t directly produce or emit CO2 must consider their use of electricity and their reliance on traditional transportation methods, among other potential sources of CO2. (Image from Gebbie Lab)

The world, as of 2017, was emitting 38 gigatons of CO2 into the atmosphere each year. To put this into perspective, 1 gigaton is roughly 100 million African elephants, so imagine annual global output of CO2 equivalent to 3.8 billion elephants (this article by the Washington Post on climate change provides even more context). The relative proportions of which areas release more CO2 is largely down to policies and regulations set by the different countries. Below, we see that recently, China has been a major contributor to emissions, while the US and the European Union have remained relatively steady5: 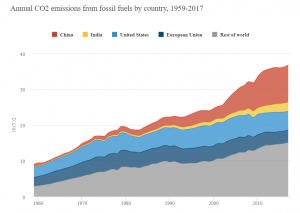 There has also been a lot of talk about the Global Carbon Budget, which is collaboration between 57 institutions across 15 countries, accounts for the amount of CO2 released into the atmosphere annually, as well as the amount of CO2 absorbed by different sinks. The sinks for CO2 are usually either absorption by the land (such as through trees or vegetation) or by the oceans (which contributes to rising ocean acidity and is also a big problem for aquatic life – coral bleaching of the Great Barrier Reef is caused by this. In the below graph, we can see a very dramatic increase in CO2 emissions due to burning fossil fuels while land-use changes, which results from agricultural practices like deforestation, remains relatively steady5: 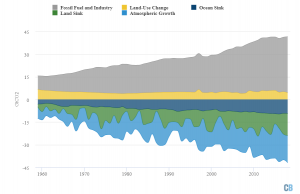 Clearly, human activity is the primary source for rising CO2 concentration in the atmosphere. It is increasingly imperative that we support active research in not just limiting CO2 release into the atmosphere, but also removing it altogether. By doing so, we can make a greater impact and begin to mitigate the effects of climate change.