We’ve probably all heard the word “catalyst” at some point in our lives. Often, it’s in the context of a person or event causing a change in something else. For instance, I might say that the first plant that my friend gave me catalyzed my love of houseplants – I now own quite a few plants! Much like our usual understanding of a “catalyst”, catalysis in chemistry is also related to the use of some molecule or material to cause a change, which is often a reaction.

The first time I heard of catalysis was in one of my undergraduate thermodynamics classes. Admittedly, I didn’t pay a lot of attention to it – in fact, the way that it was described was frankly a little boring. Now though (and I might be a little biased because I study electrocatalysis), catalysis has become a favorite topic of mine. Getting too far into the weeds can make any topic seem esoteric, but I really want to show that catalysis really has some amazing applications in our everyday lives!

Catalysis – How does it work?

Like I said, I don’t want to get too in-depth about how catalysis works. Simply put, we can consider reactions and catalyzed reactions. In any reaction, where we take some reactants and react them together to form our products, we must consider an activation energy barrier. As an analogy, we can think of a reaction almost like we’re trying to push a boulder from point A to point B:

Catalysts simply lower the energy barrier needed for the reaction to proceed!

If we think of our reactants as starting off at some energy level (point A) and our products at another (point B), the activation energy barrier is the energy hurdle that we have to overcome to go from our reactants to our products. It is essentially a hill that we have to push our boulder over so that we can reach our point B. The exact cause of this hill, and the factors that dictate the height and number of hills, depends on the reaction and the intermediate steps between point A and B, but is not super important for understanding the core principles behind catalysis.

All a catalyst does is to help change the path that you take from point A and B. This could mean making many small hills rather than one large one, or just generally lowering the height of the hill that you must overcome to move your boulder. In all, you end up needing less energy for this process than when you didn’t have a catalyst and you might also find that the rate at which you can move your boulder increases.  Catalysts, although they aid in the reaction in some way, are not changed. Sure they undergo change during the reaction itself, but the catalyst that you start off with before the reaction occurs is the same as the one that you will end up with after your reaction. 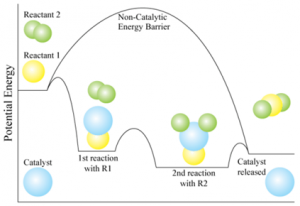 There are several different kinds of catalysis: homogeneous, heterogeneous, and biocatalysts. Homogeneous catalysts are those that are in the same phase as the reactants. Typically, this means that everything is mixed together in a solution. Heterogeneous catalysts, on the other hand, are not in the same phase as the reactants! Usually, the catalyst is some kind of solid while the reactants and products are either in the gas phase or in solution.

Heterogeneous catalysis actually enables many of the industrial processes that we rely on. These catalysts are usually some kind of metal, such as nickel, silver, platinum, and gold just to name a few. Catalyzed reactions mean that we can achieve industrial-scale output of some really important chemicals. The Haber process, or Haber-Bosch process, makes ammonia from hydrogen and nitrogen. This ammonia is then used for many applications, one of which is making fertilizers that for agriculture – this has allowed a rapid increase in agricultural outputs within the last century and is vital for ensuring that we have enough food to feed our growing populations. This reaction also is a catalytic one! Although there are several catalysts that can be used, one of the more common ones is iron because it is pretty abundant. 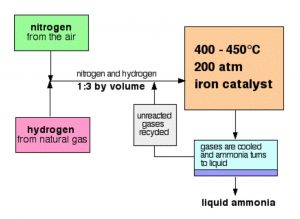 Another kind of heterogeneous catalysis is electrocatalysis, where an electrode, made of a conductive material, acts as the catalyst. The reaction is then either a reductive or an oxidative process. One of these reactions (a favorite of mine!) is the reduction of CO2 to form products like CO and methane. These can have very important implications for reducing CO2 levels in the atmosphere and turning CO2 into chemicals that we can actually use. More in-depth discussion about CO2 electroreduction is probably best suited for another blog post entirely.

The last category of catalysis is biocatalysis, which is a really unique and interesting form of catalysis in nature. Right now, as you are reading, your body contains enzymes that help you digest food and make the building blocks that make you you. Enzymes often have very specific binding pockets that select for the desired reactant(s) needed for a reaction. In this way, the enzyme is like a “lock” while the reactant, also known as a “substrate,” is the “key.” Only when the correct key is used on the correct lock will the reaction take place. Enzymes, through this method, are very good at selecting only the desired reactants and can catalyze reactions at astonishing rates. 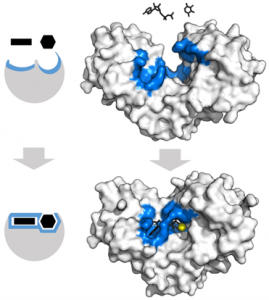 Enzymes have binding pockets for specific reactants – the enzyme is the lock and the reactants are the key! (Image source: Wikipedia)

These enzymes, which are often proteins, have specificity and efficiency that could put any man-made catalyst to shame. And it’s important that they have these characteristics too – enzymes that don’t function properly or are not present in a body when they should be are the cause of several disorders, such as Hunter syndrome, Tay-Sachs disease, and Gaucher disease1. Enzymes are not only crucial for breaking down the foods that we eat, but also in the day-to-day functioning of our body, known as metabolism.

Although the specific mechanism by which different catalysts operate are very different, the underlying reason for why they are so important remains constant. In order to achieve faster reaction rates and more specificity for a certain product, we must use catalysts to our advantage. Choosing catalysts, understanding how they work, and learning how we can engineer them to our advantage are all reasons why we study catalysis. Really, catalysis spans several fields and to cover them all would take a very very long time. But I hope that this short post has catalyzed your interest in catalysis!