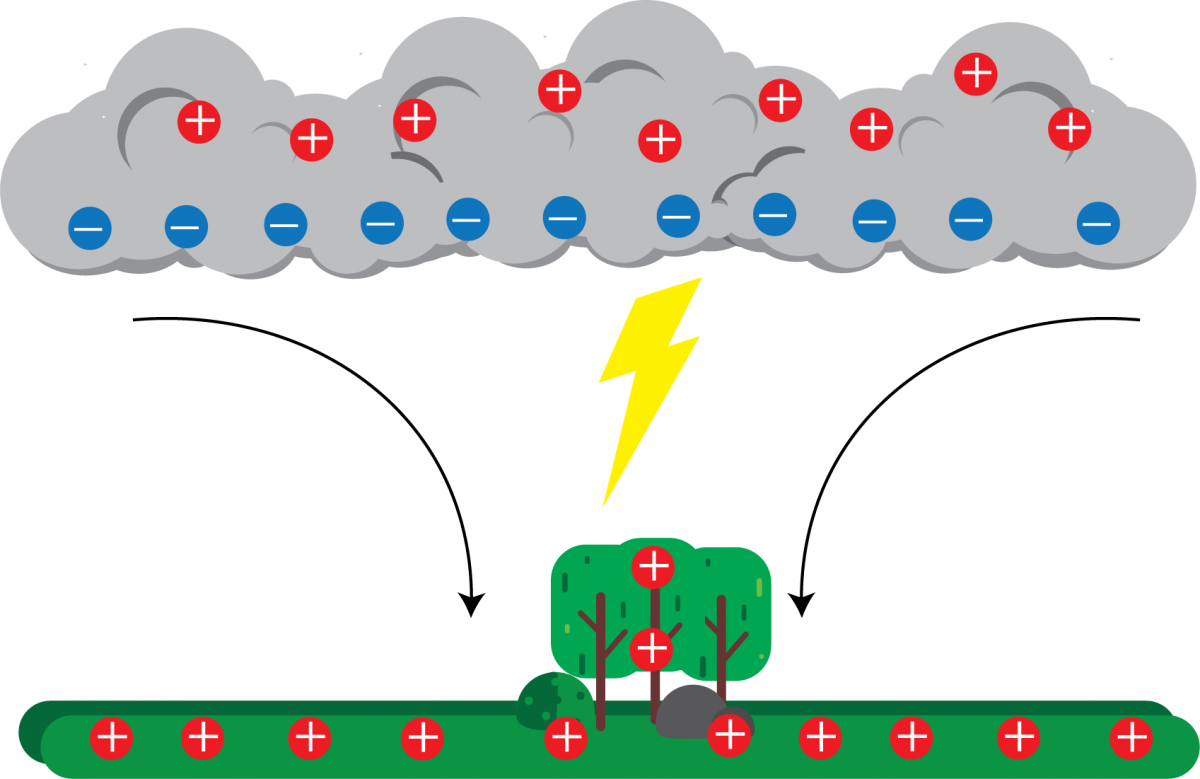 Even as someone who works in an interfacial sciences lab, it has only recently occurred to me that we live at an interface! Interfaces are where some of the coolest and most interesting phenomenon occur. And recently, we’ve been getting a few thunderstorms here in Madison and it occurred to me that the formation of lightning is a particularly extravagant display of how cool interfaces are!

An interface, at its simplest, is simply where two or more different phases meet. To demonstrate what I mean, picture a bottle of vinaigrette (salad dressing) containing oil and vinegar. We can see now that there are a few different interfaces we can identify: the interface of oil and vinegar, oil and the bottle, vinegar and the bottle, and the dressing itself with air, among many others:

There are so many interfaces we can identify even in a bottle of delicious salad dressing! (Image made by author)

Interfaces are really interesting because they have different properties than the bulk of each individual phase. The interface that we live at is therefore a solid-gas interface. Or, if you’re aquatically-inclined, a solid-liquid-gas interface. At this interface of ours, we reap many benefits, which includes great big thunderstorms!

So how do you make lightning? First of all, you’ll need hot and cold air. The hot air rises and in doing so, causes the water vapor in the clouds to rub up against the ice crystals that exist at higher altitudes. This bumping and moving causes charges to build up in the cloud, sort of like when you walk on a carpet in the wintertime and generate static electricity.

In the cloud, this generates a positive end, towards the top of the cloud, and a negative end toward the bottom. These negative charges causes the ground to develop a slight positive charge due to the protons in the ground, because opposites attract!

Usually, air is pretty good at insulating, but when these interactions between the ground and the clouds are strong enough, the negative charges move from the bottom of the cloud towards the ground (or sometimes, to other clouds that have regions of built-up positive charges due to charge neutrality). In the act of releasing this energy from the cloud, we get lightning! Lightning usually strikes higher points, such as trees or tall buildings, because charges build up there as well and electrons from the clouds have to travel a shorter distance to reach the positive charges.1,2 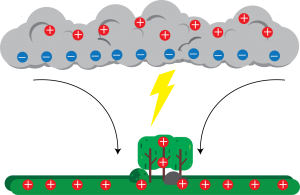 A close-up view of how charges at the ground-air interface build up and ultimately produce lightning! In order to maintain charge-neutrality, all positive and negative charges must be balanced so there are areas of slightly more negative charges on the ground as well (not shown). Usually, it is this dynamic accumulation of charges at interfaces that make lightning possible, but charges must always be balanced! (Image made by author)

When this lightning is formed, the energy rapidly heats the air within the vicinity, which generates the thunder as the hot air rapidly expands outwards. The only reason why we see lightning before we hear the thunder is because light travels much faster than sound does.

In our research, we study electrochemical interfaces. On very small scales, like the kinds that we work with, interfacial properties can be quite a bit different than the bulk and can yield really interesting phenomena. However, a lot of the same principles apply! For one, applying a charge to an electrode causes molecules of opposite charge to build up at the interface due to charge attraction, which ultimately leads to the formation of an electric double layer. Within the electric double layer, a lot of interesting things can happen, which include electrochemical reactions. Air is usually an insulating medium, which means that charges are not able to move through it easily. In electrochemistry, we typically want a medium, called an electrolyte, that will allow charges to move around.

Beyond electrochemistry, the differences in energies at these interfaces are responsible for a variety of phenomenon. They dictate the shape of water droplets on different surfaces, which explains why some materials are hydrophobic while others cling onto water. They also explain why water striders are able to walk on water (surface tension is an amazing topic that deserves its own post!), and why some liquids mix but not others. And because it’s summer now, interfacial energies can be used to create things like ice cream that melts at a slower rate using emulsions and nano-scale structures. Biological interfaces allow us to function and actually enjoy all of the other interfaces around us. Behaviors that occur at interfaces are fascinating and understanding what happens at interfaces can help open new opportunities for developing technology.

https://www.nasa.gov/audience/forstudents/k-4/home/F_What_Causes_Lightning_Flash.html – Another explanation for the formation of lightning!

https://www.biolinscientific.com/blog/surface-science-how-it-all-began – The study of interfaces is also known as “surface science,” and this blog goes into a bit of detail into its development over the years.

https://www.bnl.gov/cfn/research/interface.php – Brookhaven National Laboratory is studying interfaces with a focus on how to enhance catalytic performance.

https://www.pnnl.gov/science-interfaces – A nice example for why interfaces are being studied for technology like energy storage from Pacific Northwest Laboratory.