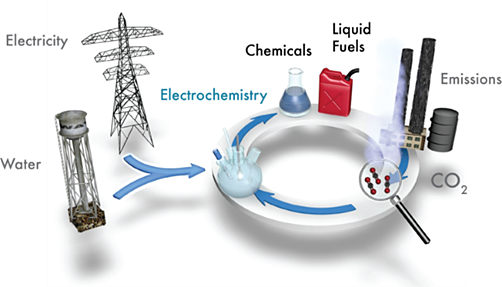 It has become abundantly clear that rising CO2 concentrations has become a major concern because it contributes to global warming. Increasing temperatures can wreak havoc on the environment, affecting humans and animals alike. And it’s increasingly obvious that human activity is responsible for most of the annual global CO2 output into the atmosphere. With industrialization comes enormous outputs of greenhouse gases and even efforts to simply limit CO2 release will not be enough to curb global warming. It is therefore imperative that both carbon neutral and carbon negative initiatives are considered by companies and governments.

Ways to Reduce CO2 in the Atmosphere:

The good news is that there is significant ongoing research into novel methods of capturing and using CO2. Combined, these projects aim to prevent more CO2 from being released into the atmosphere or to even remove it. However, there is no end to the different approaches scientists are exploring but to prevent this post from becoming a too long, the focus will primarily be on the advances in ionic liquids as a way to either capture CO2, or to use CO2 to make value chemicals since they are gaining a lot of attention as “green” chemicals.

Carbon capture and storage (CCS) refers to the capture of CO2, either from the output of factories, or directly from the atmosphere. These kinds of technologies vary widely in cost and impact – reforestation, while relatively inexpensive, has a much smaller impact on CO2 concentrations than direct capture, which is expensive but can absorb CO2 at higher rates. Other methods include modifying agricultural practices to grow crops that are more efficient at capturing CO2 and adjusting ocean alkalinity to increase the amount of CO2 that can be dissolved into the oceans.1 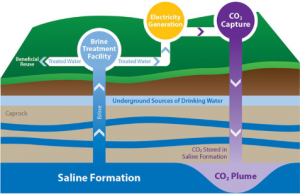 Here’s one example of carbon capture and storage. The idea is that using sustainable electricity, a direct capture technology can remove CO2 from the atmosphere and store it in saline formation underground. (Image Source: National Energy Technology Laboratory)

Recently, bio-energy with carbon capture and storage (BECCS) has been a promising topic in the research community. The idea is to burn plant matter for energy that can then be used to pump CO2 underground to be stored. However, implementing this process is very costly and scientists are figuring out the best kinds of plants to use for this process.1,2 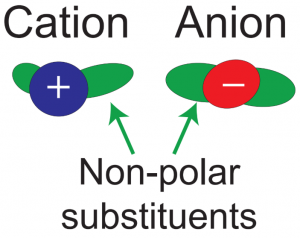 Like traditional salts, ionic liquids are made up of cations and anions. What differentiates these salts from others, however, are their low melting temperatures due to their irregular shapes and inability to pack tightly together, which means that they are often liquid at room temperature. (Image from Gebbie Lab)

Ionic liquids (ILs) have gained attention in the past 2 decades as interesting compounds that can capture CO2, sometimes reversibly. (For more information on what ionic liquids are, check out the blog post “What are Ionic Liquids?”) Reversible capture means that under certain conditions, captured CO2 can be released. The methods by which this is achieved are also very different and depend on the method of capture, the properties of the IL, and the method of release, among other factors. 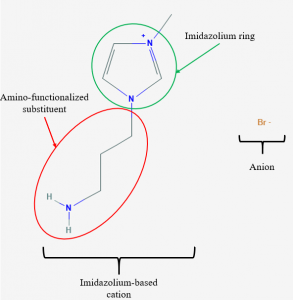 An example of an amino-functionalized imidazolium-based ionic liquid. Here, the 5-member ring is the imidazolium and the NH2 group at the end of the alkyl chain substituent makes it a TSIL. (Image from PubChem, Modified by Gebbie Lab)

Drawing inspiration from established methods of removing CO2 from industrial processes, one method for CO2 capture is to add an amine group to an ionic liquid. Dubbed “task-specific” ionic liquids (TSILs), these ILs show greater CO2 capturing ability than ILs without the amine group. When heated, these ILs have further been shown to release the captured CO2. This means that it can be reused repeatedly without loss in capturing efficiency.3,4 The released CO2 can then be used to sustainably produce other chemicals.5 ILs are better at absorbing CO2 than many other compounds6,7,8, but while this method shows great promise, using it in industrial settings is still more costly than traditional methods. 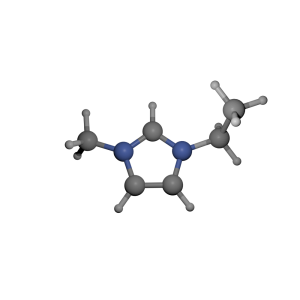 An example of an imidazolium cation. Although ionic liquids can vary widely in cation and anion choice, imidazolium-based cations are the most popular. (Image from Gebbie Lab)

In the case of ionic liquids, the goal often is to capture CO2 and store it in a latent-state , meaning that it is not reactive, until it can be used. The biggest problem with its implementation currently is scale-up costs. Compared to other methods, ILs are currently expensive to produce. However, if ionic liquid-based systems show to be promising in both CO2 capture and CO2 reduction to make value-added chemicals, then these systems will become a lot more attractive due not only to reusability, but also to its ability to generate other chemicals.

Carbon dioxide can be used as a carbon source for many small chemicals that are used to make everyday items. However, one key obstacle is the energy required to convert CO2 to these valuable source chemicals. Through the process of CO2 reduction, CO2 can be used to make carbon monoxide, oxalate, formic acid, and hydrocarbons like methane or ethylene, among others. These chemicals are then used in other processes to make compounds like polyethylene, which you might find in everyday plastic items, often denoted as PET. It’s no wonder then that a lot of researchers are so interested in improving the efficiency and selectivity of these reactions. Efficiency is important because it means that less energy is required for the reaction and selectivity means that researchers can which product is made.

A field that we in the Gebbie lab, as well as many other ionic liquid-focused groups, are interested in is CO2 electroreduction (this if often shortened to CO2ERR or CO2RR in literature). In electrochemistry, the main goal is to use electricity to either add electrons or remove electrons from your electrochemical cell. The end result is the ability to drive a desired reaction. There’s a lot more nuance to this process, but maybe we’ll save that discussion for another time.

A relatively new angle on CO2RR is through the use of ionic liquids – one of the first papers that generated a lot of buzz was by Rosen et al in 2011, where they used an imidazolium-based ionic liquid in their electrolyte solution. By comparing the results in conditions where CO2 was either absent or present, they showed that they could achieve CO2RR at much smaller potentials than in solutions without that ionic liquid.14 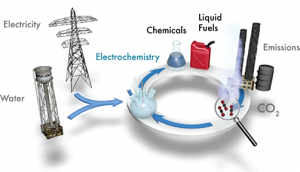 By enabling efficient CO2 reduction, CO2RR in ionic liquids could help close the loop and enable sustainable synthesis of chemicals and fuels that can feed industrial processes. (Image from National Energy Technology Laboratory)

Since then, the field has exploded. Researchers have been trying to determine the mechanism behind CO2 reduction in ionic liquids. Once the mechanism is known, we can intelligently design ILs to increase selectivity or for use in other important reactions. But still, there are key fundamental questions that have not been answered. For instance, are imidazolium-based ionic liquids special in their ability to catalyze this reaction? Some researchers have looked at ionic liquids based on other structures and have found interesting results that tend to differ between papers.15-17 Are ionic liquids really catalysts or are they somehow consumed during the process? Catalysts alter the mechanism of reactions but are not used up so the amount of a catalyst before and after a reaction should be the same. And finally, how do different reaction conditions, such as the amount of water in the system18, whether or not a solvent is being used to dilute the ionic liquid19-22, or the kind of electrodes are being used23-25, affect the final reaction mechanism? All these open-ended questions make this area of research incredibly intriguing and if they can be answered rigorously, there is great potential in using ionic liquids as a greener, more sustainable way of removing and using CO2.

The amount of carbon dioxide we release into the atmosphere has been a serious problem for a long time and it’s a difficult problem to solve. By educating ourselves on the issues, we can better understand how we can work together to mitigate the disastrous effects of climate change. Companies are increasingly pledging to be carbon neutral or carbon negative and new initiatives are being developed to not just limit CO2 release, but to remove it in order to make progress.

The issue of CO2 in the atmosphere has shown to be a potential avenue for reducing some of the effects of global warming. Carbon capture and storage technologies vary greatly in impact and cost but are promising ways to remove CO2 from the atmosphere for later use. CO2 reduction can be used to convert carbon dioxide to value-added chemicals. In both areas, ionic liquids are gaining attention as sustainable alternatives to traditional chemicals and processes.

However, CCS and CO2RR are still developing technologies and it is very unlikely that they can be implemented on large-enough scales to make an immediate impact. Beyond CO2, there are also a lot of other avenues to explore. Sustainable synthesis for some of the most important bulk chemicals, increased reliance on sustainable energy, and the development of electric cars to reduce the need for petroleum are just a few. It’s so important to support scientific endeavors and to encourage policymakers to promote these efforts through green initiatives. Although climate change has been getting more attention, we still have a lot of work left to do.

https://climate.nasa.gov/causes/ – An overview of the different kinds of greenhouse gases from NASA

https://climate.nasa.gov/news/2865/a-degree-of-concern-why-global-temperatures-matter/ – Really nice overview of the implications of a 2C increase in global temperatures

https://theconversation.com/why-we-cant-reverse-climate-change-with-negative-emissions-technologies-103504 – Gives a nice overview of current carbon capture technologies, how they work, and why they might not yet be mature enough to make significant impact

https://www.carbonbrief.org/analysis-global-co2-emissions-set-to-rise-2-percent-in-2017-following-three-year-plateau  – Really nice report and analysis  of CO2 emissions as of 2017

http://energy.mit.edu/podcast/negative-carbon-emissions/ – MIT Energy Initiative is a great podcast to listen to if you want to learn more about the issues that concern not just sustainable energy, but also the current electrical grid – it ranges from scientists to people more related to policymaking. This episode in particular is about greenhouse gas emissions and carbon negative strategies