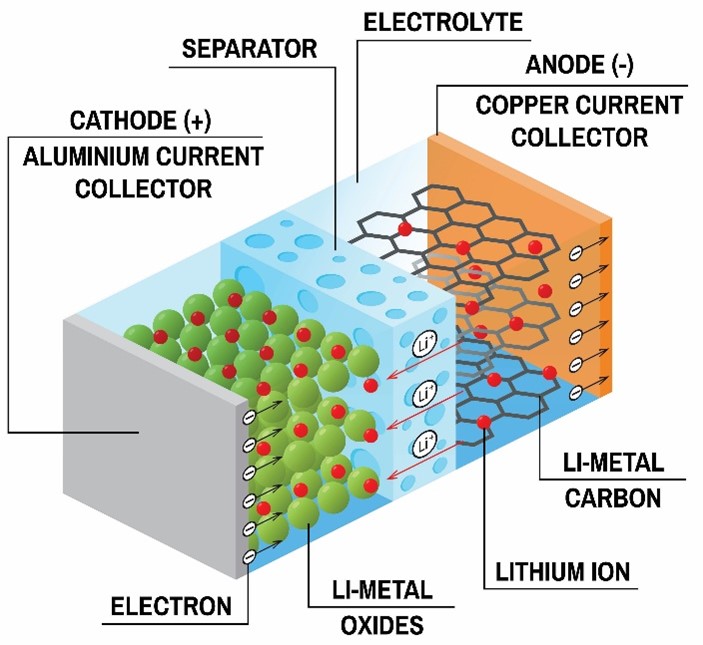 Batteries are a vital piece of modern technology. When they function properly, users will not need to know about them. At their worst, the devices need frequent recharging, or could potentially burst into flames! The stability of a battery ultimately dictates if a device is commercially viable, device longevity, the limits of energy that the battery stores, and how fast the device can charge or supply energy. For us to discuss some of the ways that researchers aim to improve device performance, we must first understand how the batteries that we are used to operate. For this, we turn to the lithium-ion battery (LIB).

The Structure of a Lithium Ion Battery

Be it our cell phones, laptops, headphones, or electric vehicles, technology relies upon batteries to deliver energy to power devices for a reasonable amount of time while standing up to physical damage or changes in temperature. Coming up with a device that accomplishes all these tasks is quite the engineering feat!

Research on what became our familiar Li-ion batteries began in the 1970’s, and resulted in the first commercial application in the 1990’s. Given how commonplace the devices are around the globe today, it is not so surprising to learn that the 2019 Nobel Prize was awarded to three scientists for their contributions to the development of lithium ion batteries. The primary components (as with any battery) are a cathode, anode, electrolyte and separator. 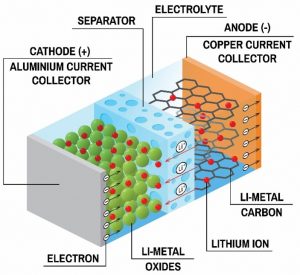 Figure 1 – Schematic of a Lithium Ion Battery. Image from OSHA.gov

The separator serves as a material that physically separates the cathode and anode so that they do not contact each other and “short” (i.e. they pass electrons to each other before they go through our electronic device, meaning we never get to see the power). This makes it easier to assemble the devices properly. It is also designed to enable the ions in the electrolyte (lithium is the positive ion of interest here) to pass through the system.

We should take a moment to appreciate that even though recharging batteries is a relatively new, yet now expected, feature of batteries, this feature was brought about by the lithium-ion battery. This was one of the significant reasons why the development of the lithium ion battery won the researchers a Nobel prize; “They created a rechargeable world.” The ability to construct batteries that recharge brings to life the issue of long-term stability of the device, and we will see that device stability plays quite a significant role in how feasible batteries are for commercial use.

The Consequences of Battery Instability

To show why researchers care about battery stability, I think it is first important to understand what the consequences of battery instabilities might be. In general, we understand batteries to be relatively safe devices to carry around everywhere, but the safety that we are accustomed to arises from the extensive effort that was put into designing stable devices. However, we do not need to look too far to see the effects of when batteries fail.

Perhaps the most prominent case of battery failures is the Samsung Note 7 cell phone, which demonstrated battery failures that led to battery fires and explosions in devices that ended up in the hands of many users. Overall, 2.5 million phones were recalled as a result. The main cause turned out to be a physical design flaw, which led to puncturing of the battery and eventually a short-circuit of the device. Check out this website (https://www.bbc.com/news/business-38714461) for an in-depth discussion of the details on the cause of the battery failures. 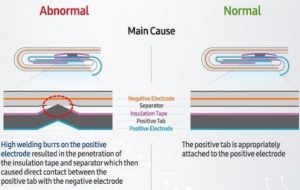 The Federal Aviation Administration published a report on several incidents (300 since 2006) involving batteries. Many of these involved consumer devices starting to smoke or bursting into flames, and led to flights making emergency landings with the devices, thankfully with no reported serious injuries. The National (NREL) includes a database of battery failure tests that you can download and view, and they also show interesting videos where they study the failure of batteries in controlled environments to learn more about ways to mitigate such failures. Notice how the device rapidly expands upon extreme heating.

With batteries being present in scenarios where explosions and fires pose especially high risks, it becomes increasingly vital to ensure the stability of such devices. Ultimately, batteries need to hold up to any situation that someone might expect to find themselves in, whether it is flying on a plane, driving a car and getting into an accident, and especially if it is just sitting down with a phone in your pocket. So how do researchers go about studying and designing the stability of batteries?

The Stability of a Battery

The chemical stability of a battery refers to the aim to make batteries that do not react in any way that is not intended in the use of the battery. For example, if the electrolyte participates in reactions that are not used for battery performance, then we should probably come up with a better electrolyte. In the extreme case, we can imagine that if the battery operates in a condition where the materials are exposed to air, then the components of the battery must not degrade or react in the presence of oxygen, since oxygen constitutes 21% of our air. Alternatively, we could package the device in such a way that limits the exposure to air. Physical casings are used for this. However, if this casing fails due to mechanical damage, we still face issues arising from chemical instability. This highlights how the intersection of these different types of stability ultimately determine how safe a battery becomes.

The definition of chemical stability is often interpreted as a blanket term for all types of stability. This is okay, since chemistry is at the root of all these effects, we just need to be clear on how each study defines their interpretation of stability.

Mechanical stability refers to how well the physical structure of the battery holds up during operation and during any damage that may come to the device. This can come in a few different ways. One consideration is the physical response of the electrodes as ions move from one electrode, through the electrolyte, and into to the other electrode. Materials must be chosen not only to obtain sufficient energy storage, but also to achieve devices that hold up to changes in size associated with ions intercalating in electrodes or through the electrolyte. This issue appears to be pronounced in solid electrolytes.5 If not carefully designed, electrodes or solid electrolytes can crack or rupture, possibly leading to device failure in the best case scenario or explosions or fires in the worst case scenario, due to rapid discharge of the stored energy from an electrical short.

Another consideration is the mechanical response of the materials to outside conditions. It is important that batteries must be able to withstand drops, falls, impacts, and more to be considered safe for a variety of applications. In liquid-based electrolytes, physical damage can result in rupturing of the separator or cracking of the electrode, as discussed above. Check out this video of what happens when batteries are subjected to quite extreme, but somewhat plausible, physical damage.

Caution: Do not try this at home

Different battery designs can be used to achieve higher structural integrity, such as in a solid electrolyte. Keep in mind, the solid electrolytes must also be carefully designed to avoid cracking and swelling as well. Solid electrolytes have a benefit of mitigating lithium dendrite formation, which is the growth of solid lithium across a battery, which can ultimately lead to an electrical short, rapid discharge, and subsequent fires. Researchers are looking at ways to reconcile some of the previously mentioned issues with solid electrolytes to circumvent dendrite formation, and those who pursue liquid based chemistries study ion-transport and better interfacial coatings or separators to prevent formation of dendrites or inhibit their growth. 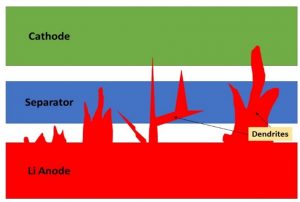 Thermal stability refers to how the device behaves as the temperature of the battery changes. While the performance of the battery (how much current it passes, for example) will always be limited by the temperature, we often talk about how the device holds up to increasing temperatures. If the device heats up significantly, materials can undergo unwanted side reactions6, expand to the point of rupturing, and ignite the typically-flammable electrolytes that are used. Since heat comes from passing current (the main function of a battery), researchers often have to play tricks to ensure that this heat can be dissipated from the device to prevent thermal runaway, where chemical and electrochemical reactions give off heat as they proceed, but they also proceed faster when they get hotter, leading to a dangerous cycle that leads to fires or explosions.

Some battery designs utilize changes in the concentrations of organic (flammable) electrolytes relative to the concentrations of the salts (ions) that are in the electrolyte3, some focus on control strategies to optimize heat transfer to pull away any excess heat efficiently or force the battery to only operate between certain charging limits7, and some focus on entirely eliminating the presence of flammable materials using alternative liquids, solid electrolytes, or a hybrid material.8

There are many aspects of battery stability that must be addressed to match the significant strides that we have seen in how much energy can be stored in such a small device, and researchers are actively pursuing this research at universities and research institutions globally. Battery safety is ultimately determined by the intersection of chemical, electrochemical, mechanical, and thermal stability. Different battery designs (aqueous, solid state, hybrid) and materials are actively studied, and each shows unique advantages with their own drawbacks.

Ultimately, it is vital to human safety and device performance that batteries are designed to be inherently safe. To me, this is the main goal that motivated me to study the motion of ions and material choices for batteries! If researchers can maintaining present device performance, but extend the lifetime of a battery significantly, then we may soon see a dramatic reduction in energy storage infrastructure, putting our world one step closer to matching the demand for energy without reliance upon non-renewable resources.